Discover McNabs Island on a Guided Heritage or Nature Tour this summer! 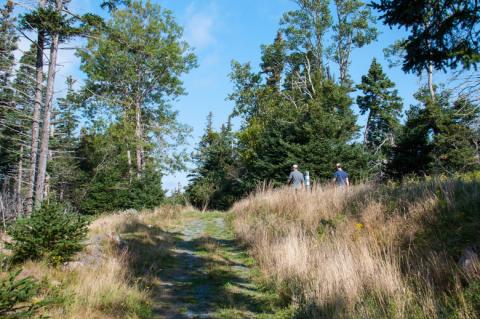 Hike through Canadian history on a Heritage Tour! Learn why the Island was important to the Mi’kmaw First Nations, the early French settlers, and the British, who built several forts on the island to protect the Port of Halifax. Admire the panoramic view from Fort McNab National Historic Site. Discover where Bill Lynch, the Midway King, got his start in the fairground business. Learn the tragic story of the SS England, quarantined off McNabs Island in 1866. Visit the forgotten Victorian Gardens and the ruins of the A.J. Davis Soda Pop Factory. Heritage Tours are scheduled for July 3, 10, 17, 31 and August 7, 14, 21, and 28.

On Sunday July 24, we are hosting a special Hangman’s Beach Tour based on the characters and setting of Thomas Raddall’s novel of the same name. This historical novel set on McNabs Island during the 1800s, is a story that intertwines Peter McNab and his family with the fictional characters Ellen Dewar and Michel Cascomond.

On our Nature Tour, you’ll watch Nova Scotia’s provincial bird, the osprey, fish in the island’s coves; see where the endangered barn swallows live at Fort McNab and learn about coastal plants and island animal habitats. Observe the ebb and flow of the tide in McNabs Pond, and stroll along sandy Maugers Beach. Dates for our Nature Tours will be announced later this spring.

Departure for our Summer Tours is from Eastern Passage from A&M Sea Charters, 87 Government Wharf Rd, Fisherman's Cove.
Cost: $35 (Adults), $20 (children/youth 16 and under), Babies and toddlers 3 and younger are Free. Discounted tickets for Friends of McNabs Island members cost $30.
Space is limited to 25 people per trip.
Times: 9:30-3:30. A second trip from 10:30-4:30 will be added later if there is a demand.